A politically-led, cross-party organisation, the LGA works on behalf of councils to ensure local government has a strong, credible voice with national government. They aim to influence and set the political agenda on the issues that matter to councils so they are able to deliver local solutions to national problems.

In total, 421 authorities are members of the LGA. These include English Councils, the 22 Welsh councils via the Welsh LGA, fire authorities, passenger transport authorities, national parks via 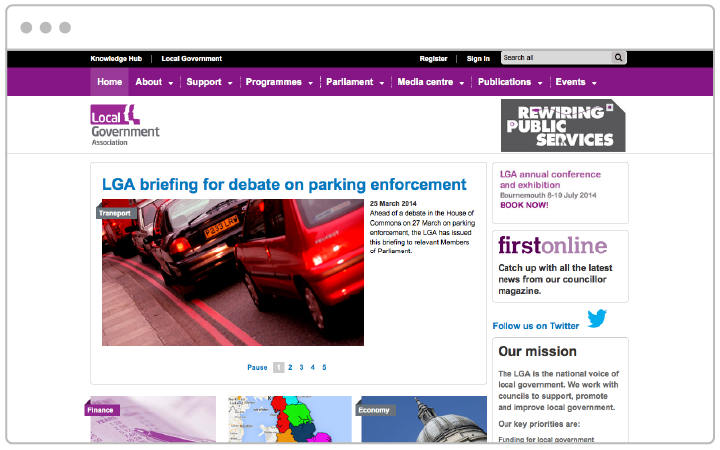 As a membership organisation the LGA works with a multi-faceted audience reflecting the diversity and complexity of local government in the UK. It covers a variety of political audiences of various persuasions alongside practitioners in a broad range of disciplines. The LGA therefore has a requirement to offer a wide range of different information sets to multiple audiences through its website. The organisation was also looking for a proven platform that was used by local authorities and other public bodies.

Given the website sits with the organisation's Marketing and Communication Department, a product that is technically easy to understand and use was vital to the success of the project

and key to the decision making process.

In line with UK government trends, the company also wanted to look at an Open Source, Open Standards solution. They needed the website (Content Management System) to integrate well with other online systems in order to leverage content across all their web platforms.

Finally, the LGA was seeking to minimise costs generated through over-reliance on a single provider of a customised proprietary solution, as had been the case previously.

The challenge was to deliver the following:

When the LGA looked to consolidate its digital offering in 2011 it already had one development underway using Liferay. This experience showed that the portal platform could deliver the kind of user experience that the organisation and its members required. It also showed that Liferay could deliver a configurable system that would significantly reduce reliance on expensive custom coding.

The LGA was especially interested in the highly configurable user role and organisation functions of Liferay. This allowed the organisation to closely model the complexity of the audience and offer a more tailored, personal experience.

There were several platforms considered, but Liferay was chosen for its overall ability to deliver the access model required and integrate with other enterprise and web systems. The Open Source and Open Standards model offered by the software meant that the provider base was broad. This also made it very attractive for government use.

The main body of the initial work comprised of creating a comprehensive description covering all the required user types. The development team then worked to create a corresponding three dimensional security access matrix for all content and users. This was re-created in Liferay using a roles and access model onto which every one of the 121,000 registered users was mapped.

Core to the delivery of customised web content was the integration of the existing LDAP user database, which was a simple process using Liferay. All customer details were stored in LDAP and administered through Liferay.

In addition there were four political groups housed within the organisation, each requiring an extranet for its members. This entailed the production of four separate, locally administered sub-sites, created using a template with customisable look and feel. Each group received local admin access to their dedicated area of the main site.

By allowing the integration of the existing customer contact base stored in the LDAP directory, Liferay gives the organisation the ability to leverage legacy business intelligence to personalise the user experience. Using customer tailored site delivery caters for a wide variety of needs across a heterogeneous audience. Liferay provides functionality and security features that allow the LGA to vary their offering to a wide variety of individual customers. This led to an increase of approximately 50,000 registrations over the 12 months from launch.

Councillors are a key audience for the LGA and it was able to offer dedicated web services to this audience segment for the first time. The ability to add sub-sites easily helped greatly in adding business value for the organisation by building support with this key demographic. There was a corresponding increase of about 5,000 new councillors following the addition of this service.

Liferay integrated seamlessly with other back office and web systems. The organisation's social collaboration platform, Knowledge Hub, was also on Liferay. This allowed the LGA to leverage content from both systems, providing a joined-up digital offering and greater context for content.