We chose Liferay to help us face social innovation challenges for our existing and future customers.

KLESIA is a paritarian social security Group which was created in 2012 from the merging of the Mornay and D&O Groups. Specializing in insurance for those on complimentary pensions, KLESIA essentially brings together pension funds, social security institutions, and health insurance funds. It currently has 3,200 employees.

In 2012, the Group recorded revenue of approximately €8 billion in complimentary pensions and personal insurance. 60% of this figure came from agreements with professional sector representatives who choose or recommended KLESIA to manage the social security and/or health insurance contracts of the workers in their sectors.

As a leader in complimentary health insurance for professional sector employees, including those working in pharmaceuticals, freight and passenger road transport, HORECA, real estate, watchmaking, and floristry, the Group can count close to 370,000 businesses of every size and industry among its customers for social security and health insurance. Klesia covers 3.5 million people. 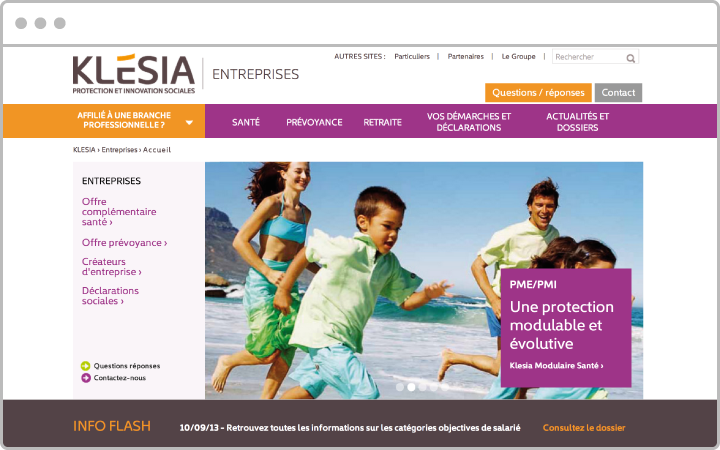 In difficult economic times where legislation is rapidly changing and customers are becoming more demanding, KLESIA has had to face multiple strategic challenges. These include establishing a new identity as a social innovator in its market, streamlining its teams and processes, gaining customers' trust, and successfully moving into new territories. To respond to these challenges, KLESIA had to get its website live very quickly so as to display a coherent image of the new Group and reinforce its history, values, objectives, and ambitions.

Eventually, in addition to functioning as a collection of general content, the site would have to become a real tool for steering and managing customer relations. It was necessary for KLESIA to suggest innovative offers and services in dedicated, personalized sections of the site, for example, in order to gain the trust of the different professional sectors. The second version of the site, which is currently under construction, would have to achieve the above by being available in as many editorial and graphic versions as KLESIA has customers in different business sectors.

The Communication and IT Departments are the two main teams working on the project, which is overseen by the Cross-Company Projects Department.

KLESIA chose Liferay's solution to develop its digital strategy. They did so for a number of reasons.

The first reason was due to its flexibility of content management. KLESIA had to quickly create a corporate website using the new brand colors which would display coherent content reflecting the merging of D&O and Mornay and the new Group's services, including the KLESIA Made-to-Measure Health Insurance range.

Secondly, Liferay was chosen for its Java environment and ease of integration with different information systems.

"Given that the two companies have merged, the solution we chose had to be capable of integrating with the different data systems used by each", explained Pascal Broutèle, Head of Collaboration, Cross-Company Applications and IT Integration Division. The Open Source nature of the solution was also a big draw.

Other key factors included its agility (easy management of portlets and compliance with Java standards), its scalability (multiple possibilities for growth), and its robustness.

KLESIA also wanted a solution which could integrate an authentication system so that they could offer their customers specific services based on their business profiles. The different professional sectors could therefore access relevant services and information and advice; access to regulatory services, in particular, was a priority. Employees would need to be able to access an up-to-date record of points (RAP) and a record of their personal details online, while pensioners would need access to their last payments and tax returns.

Finally, KLESIA wanted a website that was mobile- and tablet-friendly. By the end of 2013, there were 27 million mobile web surfers in France. That's an increase of 3.4 million in one year, and it represents 50% of the population aged over 11. Tablets and smartphones are clearly undeniable avenues for the future.

Within a few weeks, the first version of the website using the new brand colors went live for customers and partners to see KLESIA and what it had to offer. Customers can already access information using their own profile: individuals, companies, partners or professional sectors. The site has been well-received. Customers have found it easy to navigate and user-friendly.

The second version, which is currently under-construction, will allow the Group to continue down its path of separating content by professional sector and offering tailored services using an authorization management system. Pensioners, for example, can see their pension payments, register change of details or download tax return forms.

Finally, KLESIA will offer its customers the opportunity to pay online, in particular for health costs, health insurance, and personal insurance.

Case Study - EN Case Study - FR
Having Trouble?
Oh no! Sorry about that. If you’re running into issues, we suggest you try: If you’re still having trouble downloading, please reach out to us on our Contact Us page. Thank you!