Liferay proved itself to be a great platform, capable of answering Embrapa’s complex content management needs. The portlet model favors the reutilization of resources between the company’s different pages for its many research centers, avoiding replication of coding and data. This technology presented us with the customization options needed to create a satisfying user experience, greatly improving Embrapa’s web presence.

Embrapa is a company created in 1973 which works under the Ministry of Agriculture, Livestock and Supply, and has the mission of developing agriculture and livestock models based on technology and innovation. Overcoming all existing barriers and limitations to the production of grain, meat and other kinds of food supplies, Embrapa has been the driving force behind this segment in Brazil, bringing efficiency to its agriculture, livestock and grain production. It was responsible for increasing the productivity of beef and pork in over 22 times the previous number, while also creating a way to turn the acidic lands of the Cerrado into fertile ground.

Today, Brazil figures among the world’s main producers and exporters. Embrapa currently has over 9,500 collaborators, 46 research centers spread across all of Brazil’s regions, and offices and international cooperation programs in Latin America, Europe, Africa and Asia. 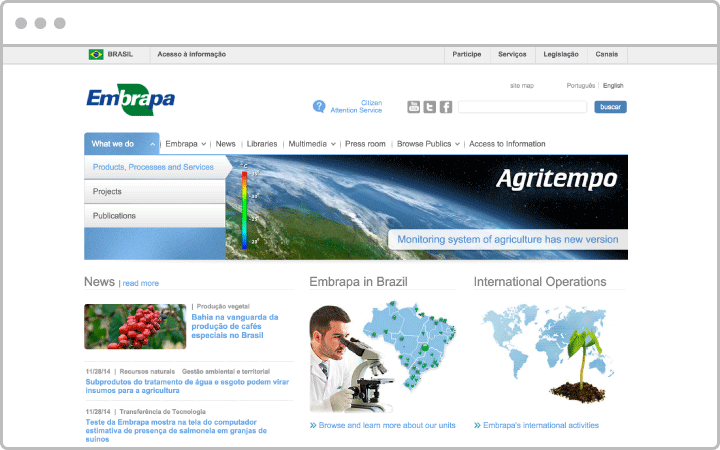 Embrapa wanted to modernize and systematize the way they presented content to the public. The first iterations of the Embrapa Portal were built of independent structures, developed by different technologies, hosted separately and with no interoperability. These factors would result in the repetition of content and lack of uniformity concerning interfaces, features and structure. The biggest challenges were to integrate all the data from the different units into a single unified platform, perfecting the content recovery interface, and building a more organized portal, one that matched the company’s status.

With that in mind, the company’s IT Department performed an evaluation of five open source CMS (Content Management Systems). The evaluation included criteria such as security, the ability to integrate multiple databases, how easily the teams would adapt to it, how well it could set up processes and support the level of cooperation between the company’s employees. Liferay was chosen after being considered the best among the five systems.

The new Liferay Portal, developed through a partnership with SEA Technology, was able to set new standards for Embrapa’s management of web content. Today, clear patterns have been established for the insertion, categorization and management of every different kind of content, all thanks to the integration of these previously successful business management models and systems. Integrating the databases to the Liferay Portal resulted in a sharp decrease of content repetition and helped enhance code reutilization processes and collaborative work between multiple teams.

These changes granted citizens easier access to Embrapa’s information, such as free-of-charge content download availability, up-to-date information, interactive product catalogs and a portfolio for research projects. The BDPA - Agriculture Research Database (Embrapa’s archive of technical and scientific studies) was also greatly benefited by the new portal, taking into consideration its monthly access numbers rose from the previous 271,019 to over 1 million. Numbers are a clear indicator that the new portal was able to provide citizens with an improved way of accessing Embrapa’s digital archives.

The access indicators show how beneficial the changes were. In August, the portal presented a 124% increase in its number of page views when compared to the same month in the previous year, and the average time spent by users on the website was also greatly improved, going from 2 minutes and 52 seconds to a new mark of 4 minutes and 11 seconds.

Case Study - PT Case Study - EN
Having Trouble?
Oh no! Sorry about that. If you’re running into issues, we suggest you try: If you’re still having trouble downloading, please reach out to us on our Contact Us page. Thank you!